Coal mining became an industry synonymous with the Wadsworth name in the mid-1880's. The fact that the railroad came through Wadsworth nurtured the growth of mining to the extent that, at one time, almost all of Wadsworth was resting above coal mines. The coal was soft but good and industries throughout the state used Wadsworth coal because it was of quality and was relatively inexpensive.

On one day in the latter part of the 1880's, the Silvercreek Mine shipped over 1100 tons of coal in one day, a record which was never known to have been broken. This was particularly significant since all the coal was dug by hand and transported by a mule pulling a small cart through the four-foot-high mine shafts. Mining stopped almost completely by the 1930's but the mine shafts are still networked beneath Wadsworth. 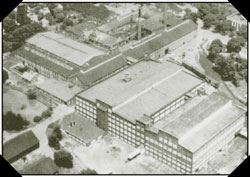 In the early 1890's, a group of men founded the Ohio Injector Company, the Ohio Match Company, the Ohio Boxboard Company [Rittman] and the Wadsworth Salt Company, all known as the Ohio Companies. Prominent among these men were the Young brothers who dominated the industrial scene for about fifty years before their retirement and ultimate deaths. All these companies were sold near the middle of the 20th Century.