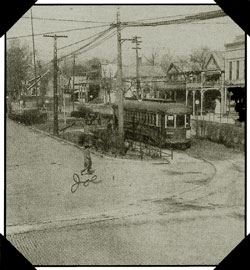 Churches began to flourish in Wadsworth. Presently, there are 25 churches in the Wadsworth area, whereas earlier there were only a few. The first, of course, was the Congregational Church, brought from New England, followed by the Methodist, Lutheran, Baptist, Disciples of Christ, Mennonites [old and new] Catholic. All the churches started with small congregations and borrowed dwellings and most of them were served by itinerant clergy.

The Mennonites boasted three different churches, depending on the focus of their respective beliefs. The new Mennonites [now called the First Mennonite Church] actually built a college where Isham School now stands. It flourished until the end of the 1800's and then closed as a result of poor enrollment and severe financial problems.

The first school was built at the south end of what is now Hartman Road. It was replaced by one at the other end of Hartman Road only a few years later.

The sixteenth square of a village in the Connecticut Western Reserve was usually retained for the government, churches and schools. After the first two ventures in building schools, the Union School was built in 1870 in the center of the village where Central Intermediate School now stands. A wooden structure, it began to decay and was condemned. In 1907, it was razed and the brick structure still standing was built on the same site.

The Union School became Central School and housed grades Kindergarten through twelve in one building. This arrangement continued through the 1940's after which the building became a high school and junior high school, and still later, a high school only.

Students from the township went to Wadsworth Centralized School -- beginning in 1915 -- now Isham School. Before that, it was the Mennonite College. At first, Centralized housed all twelve grades, but in 1927, the township paid tuition to the city school system to accept students from grades ten through twelve. The reason for this rather strange grade separation was that the city schools were on the 6-3-3 system; hence, the "high school" comprised grades ten through twelve.

Prior to students attending Centralized, they went to the twelve one-room schools throughout the township. Privately owned horse-drawn wagons picked up students at their homes and transported them to the school. In 1920, the township Board of Education purchased wagons but drivers furnished their own horses.

Motorized buses [boxes built on truck chassis] began in 1927. Girls sat on one side and boys on the other. Smaller children sat on benches in the middle of the bus. When the "buses" were not used for transporting students, they were used for hauling goods by pushing the moveable seats to the side of the truck bed.